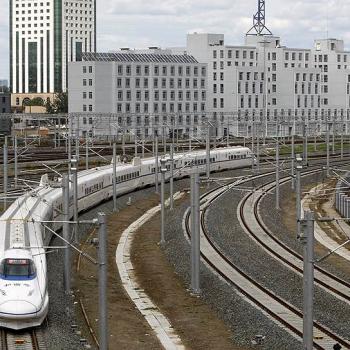 Governments around the world have been relying on modern railway transport, in particular, on high speed railways, to tackle energy crisis, environmental pollution, traffic safety issues and other problems increasingly often. We are in the beginning of the railway Renaissance era. Not only does high speed railway have obvious advantages in providing the public with safer, quicker and more convenient transport services, but it has also become a crucial economic and development driver.

The rapid construction of high speed railways has had a significant and profound impact on China’s economic and social progress. Opening new prospects for international cooperation, it accelerates industrial modernisation, promotes new generation urban planning and ecologically sustainable civilization, brings more harmony into the society and facilitates land use along the line.

High speed railway has become an emerging strategic industry with a certain scope and tremendous potential. It has given birth to a range of high-tech innovative enterprises in metallurgy, machinery, precise instruments and other industries, which have gradually formed a complete industrial chain. It has changed resource circulation and distribution both in adjacent territories and in the whole economic zone it covers. Working as an economic corridor, it optimizes regional economic structure, allows developed industries to enter developing regions quicker, supports emerging and traditional businesses in various regions and plays a key role in promoting the optimisation and modernisation of China’s economic structure and a more appropriate industry layout.

For example, after Beijing-Tianjin Intercity Railway was put into operation in 2008, travel time on the line has reduced significantly and new investment and industrial resource allocation opportunities have emerged. The economic development of Beijing and Tianjin, especially Tianjin, enjoyed a major boost. In the first two years after the opening the economic growth in Tianjin reached 16.5%, which is much higher than the GDP growth. In 2009, the annual gross regional product in the city increased by 10.1% over the previous year. Real estate, logistics, tourism, catering and other industries in Tianjin have also developed rapidly. In 2008, the retail sales of consumer goods grew by 25.2% year on year, and the growth was among the best in China. In 2009, their total retail sales went up by 21.5%.

The opening of Beijing-Tianjin Intercity Railway has stimulated the existing passenger transport market on this route, relieving pressure on freight lines and improving their transport capacity. The average passenger travel time has reduced by 20%, or by about half an hour. Speaking more generally, the high speed line has boosted both economic and other ties between the two cities. Moreover, it has accelerated the development of secondary and tertiary industries of Beijing and Tianjin, particularly the tertiary industry, optimising and modernising the industrial structure.

In the second year after the opening of Beijing-Tianjin Intercity Railway, the trade volume between the two cities increased by 25.2%; primary industry output decreased by 1.7%, with employment falling by 3.3%. However, output grew in secondary (by 4.7%) and tertiary industries (by 7.7%), employment rising by 2.4% and 4.2% respectively.

Due to their large traffic volume, high density and focus on public traffic, high speed railways can mitigate the restraints on inter-regional economic ties imposed by the distance and travel time. Therefore, the border between cities will be gradually weakened, population mobility will be accelerated, more options will be available for work and entertainment, regional resources will be shared, and their allocation will thus be optimised. High speed railway will integrate economic activities of various regions into one whole system. As regions with better economy can stimulate the development of those falling behind, infrastructure and public service facilities will often be shared among them. Human resources, raw materials, information and other valuable assets will no longer be limited to the boundaries of existing administrative areas, which means their regional flows will be optimised and an urban agglomeration or a metropolitan economy will be formed with close links between its units and bilateral influence.

Shanghai-Nanjing High Speed Railway, with a total length of 301km, connects six cities which are above the second-level administrative sub-division within the core region of Yangtze River Delta with the most intensive urban agglomeration, most advanced productive force, most robust economic growth and most dynamic development in China. Compared with highways and civil aviation, high speed railway has an edge in terms of price, time, punctuality and transfer. During the first year since the opening of Shanghai-Nanjing Intercity Railway it served over 60 million passengers with attendance rate reaching more than 95%. In rush hours it saw a one-way passenger flow of over 16,000 people. The line has attracted passengers within the range of 500km, which comes as another example of high speed railway’s integrating function.

The areas along the line have stepped into the “era of one-city” and local entertainment and business travels as well as industrial structure and even people’s lifestyle are redefined. Cooperation among regional cities is promoted and industrial layout is also changed accordingly. In addition, industrial homogenization is abandoned for the sake of differentiation and specialization. Areas where high speed railway stations are located have developed into multi-functional city centres or sub-centres, forming 1~2-hour economic circles with a function of strong cohesion and integration.

In addition, railway is the most environment-friendly transport means featuring resource conservation and environmental protection as its top values, and it has distinct advantages in ensuring ecologically sustainable development and proper development of eco-tourism. The energy consumption per hundred passengers for high speed trains operated at a speed of 350 km/h is just 50% of that of buses and 18% of that of aircrafts, which makes railways the leader in terms of energy efficiency. In the construction concept of “replacing roads with bridges”, 44 mu (0,029 km2) of land will be saved while each 1km high speed railway is constructed.

High speed railway greatly reduces the travel time across regions as well as urban and rural areas, brings down transaction expenses and costs during the circulation of commodities, optimises resource circulation and allocation, regulating the market and promoting the economic development. Besides, through the construction of high speed railways passenger and freight transport can be separated and thus the freight transport capacity of existing railway will be increased, which will allow to cut the costs of social logistics. It is estimated that 3.3 billion USD of social logistics expenses will be saved with railway freight transport proportion increased by each 1 percentage point in the entire social freight traffic volume.