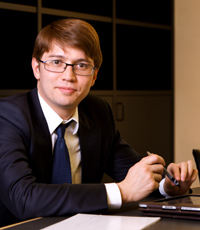 I’m often asked what the METR region stands for. I should admit that besides all the geopolitical context (METR - Middle East, Europe, Turkey, Russia – is a heartland of Eurasia) there is something very personal in all this. My university and PhD time was a time of deep study of International relations with a special focus on the Middle East. Roman history is printed in my mind and I spent many years of my career in Europe. I’m linked to Turkey not only because of my Tatar origins, but also because its recent history is a rare success story in the Islamic world. And, of course, Russia is the country where I was born and raised.

In 2012 together with my cross-cultural team we founded MIR-initiative. The name reflected our belonging to the METR area with three letters symbolizing also the three important capitals of the region – Moscow, Istanbul, Rome. It also expressed our interest in creating a vision for the region – the word "mir" in Russian has a multiple meaning: it means "peace", "world" and "vision".

The first event organized by MIR-initiative was a conference in the Italian parliament called “Bridging the new Middle East”. This was an attempt to work with the politicians and business leaders from within the METR region on new ideas for the future.

Then I was attracted by a true challenge in Russia – a high speed railway project with more than 10 thousand kilometers scheduled to be constructed in the next 15 years. This gave me an important opportunity to discuss the MIR-initiative with the key people from the transport and communication industry. They supported the idea of working together to elaborate the conceptual basis for the future of transport, communications and infrastructure in the METR region. 28 authors participated in preparation of the first edition of the MIR White book "Metro of the METR region".

Personally I believe that creation of common infrastructure is certainly a key factor in promoting a sustainable model of development in the world today. Social mobility, security and economic upliftment find their base on trasportation mobility and presence of infrastructure and communications permitting the fast passage of people, goods and ideas.

MIR White book laid a foundation for the Eurasian high-speed metro (heir to the ancient system of integrated mobility - the Silk Road). Within the future high–speed metro the crucial role had to be played by the cities as stations and, as a consequence, by the their mayors. This is how and why the Railway Silk Road Cities Forum was launched.