“From Ancient to New Silk Road” exhibition opens up in Rome 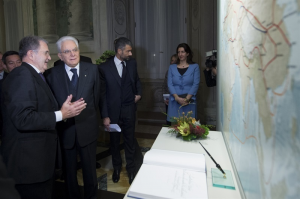 On December 5, 2016, an exhibition called “From Ancient to New Silk Road” opened up at the Presidential Palace known as the “Quirinale Palace” in Rome. The exhibition in Rome was initiated by Sergio Mattarella, the President of the Italian Republic, and was held under his auspices. The opening ceremony was attended by officials from the Italian government, Ernest Sultanov, the coordinator of the MIR Initiative and the Railway Silk Road Cities Forum, and Alexander Nosov, a member of the management board of the State Company “Russian Highways”.

At the opening of the exhibition, a discussion was held on the subject of developmental projects of the railway and highway Silk Road. Discussion members, including Alexander Nosov, the representative of the Russian Company “Avtodor”, noted that the creation of the New Silk Road would allow to bring together the Eurasian space, improve transport mobility in the region and build momentum for further integration in economy, culture, science and art.

This exhibition will be a traveling one. In March 2017, it will be opened in Turin, in collaboration with the Museum of Oriental Art of Turin. MIR Initiative plans to take part in the next exhibition and present to the general audience first New Silk Road interactive maps patterns. At the same time, it is planned to hold a Cities Forum meeting to discuss promising infrastructure projects in the framework of the New Silk Road.