Meeting with EU Commissioner for transport 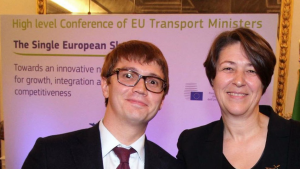 On the occasion of the Rail Leaders Summit in Berlin EU Commissioner for transport Violetta Bulc made her speech on new technological integration in railways taking place in European Union. First step was done with ERTMS – The European Railway Traffic Management System jointly created by the major European railway operators. Under her the leadership of Violetta  Bulc, who has her background in IT industry, the European railway market is becoming more digitalized and modern.

During the event Ms.Bulc was informed by MIR Initiative Coordinator Ernest Sultanov about the current activity of the Forum of the cities of the New Railway Silk Road:

1) Initiatives focused on pushing railway trade between the cities – members of the Forum. These activities are intended to boost new trading solutions, including triangle routes for the goods. The projects in this field are elaborated in cooperation with the major market players, including HUPAC, Russian and Italian Railways. The cities like Chinese Harbin, Russian Kazan, Italian Turin are also actively involved.

2) Opening of the Russian market to the intermodal containers. For a long time the Russian railway market was closed to the new types of containers. This situation is changing now thanks to first hand involvement of the Forum’s Infrastructure Committee, chaired by the former CEMAT CEO Eugenio Muzio. Russian Railways are opening to new business opportunity, starting with swap containers.

3) White book "Metro of the METR region: the cities as stations of the future high-speed metro». The project involves city mayors, business leaders and intellectuals.

Regarding the White book Ms.Bulc was kindly asked to contribute with her preface to the new edition, that will be published in winter 2016-2017.