The City of Kaluga — Newly Fledged Partner of the Forum 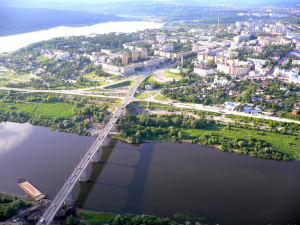 Nowadays the Railway Silk Road Cities Forum gains traction among Russian cities as a high-potential opportunity to blaze new trails in the transport and communication industry. Recently the city of Kaluga has taken the plunge and joined the Forum. The decision was made after a high-level meeting between the Forum’s representatives, the authorities of the Kaluga region and the top management of Kaluga Freight Village, held in November 2016. In this regard, it's worth mentioning that during the meeting, Anatoly Artamonov, the Governor of the Kaluga region, was offered to have a hand in drafting the second edition of the White book “Metro of the METR region: Cities as stations of the future Eurasian metro”. An official affiliation ceremony is going to be held during the opening of the Forum’s headquarters in Moscow in February.

Furthermore, the Forum is supporting railway container trade between its member cities. It is no secret that the logistics corridor between Kaluga and Dalian, a part of New Silk Road project established in the beginning of 2016, has already proved a very lucrative partnership — the building of the road has prompted a higher volume of Russian exports to Asia and has given access to the Russian and European markets for Asian countries. In particular, time en-route has plunged by three times and delivery costs for Russia-China goods transportation have plummeted.

In addition, Railway Silk Road Cities Forum has recently offered Kaluga support in their initiative of developing a high-speed railway corridor Kaluga-Moscow, which had created new possibilities for different economic agents. As for newly-found opportunities for Kaluga residents, they received a good chance to find a job in Russia’s capital. As for businesses, prospects for the implementation of innovative and profitable projects; specifically, in the field of technology transfer and production localization opened up.