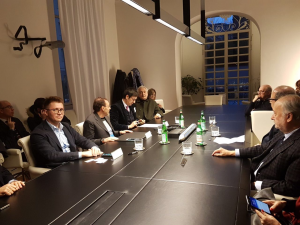 Cities have always been the key protagonists of the Silk Road. The rebirth of the Road going on right now centers on the immersive increase of traffic between 50 European and Chinese cities which accounts for 200 000 containers per year – a number that is expected to double during the next few years. To enhance this process the New Silk Road Cities Forum unites more than 60 Eurasian organizations working on elaboration of new commercial routes. It is important to highlight that over the long history of the Silk Road Turin has always exercised a leading role in transport and infrastructural development – from Frejus during Cavour time to the recent advanced projects of the Turin-Lyon HSR, high-speed connection to Genoa and city metro.

After all, the potential for development of cities depends directly on its infrastructure – both inner and the one connecting it to other cities. Illustrating this idea Senator Esposito, who has long been a devoted supporter of the Forum’s initiatives, specially marked the Frejus tunnel as a driver of Turin’s growth. Projects of the same spirit are crucial not only for Turin, but for the entire Piedmont region where intensification of trade within the New Silk Road routes will result in revitalization of all aspects of the economy.

In this context, the New Silk Road Cities Forum acts as a platform where ideas for future projects in many different spheres are born and shared. Together with architect Benedetto Camerana Silk Road interactive museum is being elaborated. Forum’s IT platform developed with Russian partners is aimed at easing of Eurasian infrastructure projects’ monitoring. Forum also facilitated the establishment of the cooperation of Polytechnic University of Turin and Russian University of Transport. Moreover, together with Eugenio Muzio, former CEO of Gruppo CEMAT, Forum launched cooperation with Russia on intermodal transportation projects.