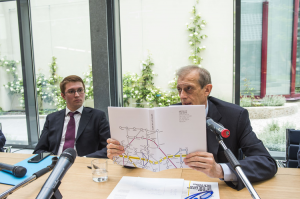 Besides business leaders, politicians, intellectuals the new edition of the White book is participated by the mayors, who signed the Turin charter of the Forum of the cities of the New Railway Silk Road.

Its establishing meeting took place on November 27, 2015 in Italian city of Turin. Today the Forum unites 30 cities, including Budapest, Akershus-Oslo, Tirana, Kazan and Jakarta. On May 5, 2016 European headquarters of the Forum were opened in Turin.

In today’s edition of Vlast magazine are published the articles of the President of the Forum and Mayor of Turin Piero Fassino:

As well as the article written by the Mayor of Novosibirsk Anatoly Lokot:

And by the Partner of BAIN&Co Dmitry Naberejnev: