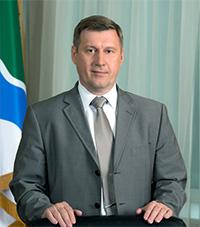 Anatoliy E. Lokot was born on January 18, 1959, in Novosibirsk. In 1981 he graduated from the Physico-Technical School of the Novosibirsk Electronic Technical Institute.

Since 1984 he worked in the Research and Development Institute of Measuring Instruments. Along with his colleagues Mr. Lokot was designing the C-300 air defense system.

In December 1996 Mr. Lokot was elected a member of the Novosibirsk Regional Council.

In December 2000 he was elected a member of the Novosibirsk City Council.

In 2003 Mr. Lokot was elected the State Duma Deputy.

In 2003-2014 he served as the deputy in the 4th, 5th and 6th State Duma. Mr. Lokot was an active member of the State Duma’s Committee on Federalism and Local Government. He worked as vice-chairman of the State Duma’s Commission on Legal Coverage for the Development of Military-Industrial Complex Institutions in the Russian Federation. Mr. Lokot also headed the Commission on Social Policy, Science, Culture and Humanitarian Issues of the Parliamentary Assembly of the Union of Belarus and Russia.

Since February 2006 he became the first secretary of the CPRF Novosibirsk Regional Committee.

He is married and has 2 children.