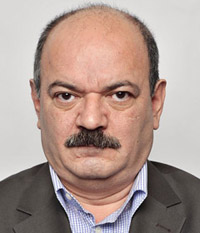 He was born in 1957 inBaku (Azerbaijan). In 1980 he graduated from the LeningradStateUniversity and started his career as a journalist in «Vyshka» newspaper.

He worked for «Komsomolskaya Pravda» newspaper and weekly «Moscow news».  Since 1995 he has been employed by the «Kommersant» publishing house and in 2010 he was appointed its Editor-in-Chief.