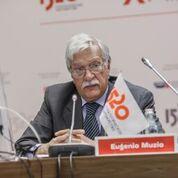 Eugenio Muzio, CEMAT founder, talks about the prospects of implementation of the large project of high-speed traffic service between Europe and Asia.

Founder of CEMAT, Europe’s second largest operator of intermodal transportation, Eugenio Muzio talks about the prospects of implementation of the large project of high-speed traffic service between Europe and Asia.

The construction of a high-speed railway system for passengers’ needs is unquestionably one of the greatest examples of technological evolution, which is changing the configuration of the transport system in many countries of Eurasia today. In the future, it may also lead to noticeable changes both in the way different people organize their livelihood and in their communication with others, which would have been hard to imagine in the past.

As an example, I would like to refer to the experience of Italy, which is similar to the experiences of other large countries in Europe. The emergence of high-speed trains in Italy has considerably changed the system of passenger transportation between the North and the South of the country. Currently, the air traffic between Milan and Rome (650 km) has nearly ceased because it takes less than three hours to travel by train. By the way, the air traffic between Paris and Lyon (395 km) in France has also ceased. More and more people prefer the Milan – Naples high-speed line (782 km) in spite of the fact that it is still possible to travel this distance in shorter time by plane. On modern trains one can enjoy comfortable seats and have access to the Internet and often good restaurant service. Trains run with such frequency that it is possible to board one every half hour. At the same time, passengers can avoid long waits, as compared to airports. As a result, trains are in greater demand. In many cases, a train ride is preferred to traveling by car, especially in case of medium-distance routes.

Today, the European railway network spans 7,000 km. It covers all four largest countries of the continent: Germany, France, Italy, and Spain. Additionally, more than 2,000 km of railways are currently being constructed. Today, work is being carried out to connect Belgium and the Netherlands with France and Germany, as well as Italy with France in the Alps. In the White Book 2011, the European Union has already expressed its willingness to expand the existing high-speed network three-fold by 2030 and to reach the point of 30,000 km within 30 years. This project must lead to the creation of a fully functional European high-speed metro.

This is a very ambitious goal, which fits perfectly into the modern trend of using railways more rationally. However, it is necessary to keep in mind that the existing systems of the European countries are not uniform, which means that technological solutions cannot be uniform either. For example, France and Spain have a high-speed infrastructure designed exclusively for passenger train traffic. At the same time, in Germany and Italy, they have launched a high-speed system with the infrastructure that can cope with heavy traffic and is designed for both passenger and freight trains. These differences can slow down the integration processes that are essential for implementing the big project we are discussing. This is why it is necessary to take specific steps in order to ensure the connectivity of the existing systems that are in place today.

The world’s largest infrastructural high-speed traffic network has already been built in China. Today, trains operated at speeds of 220-380 km/h are considered to be high-speed trains. The length of the working network with these characteristics is more than 10,000 km. The Chinese government has set a goal to reach a length of more than 20,000 km in the near future.

It is necessary to add projects of other Asian countries (Korea, Malaysia, and Singapore) to the Chinese high-speed traffic projects. All these projects comprise the large Asian metro.

All the aforementioned confirms that in the next decade the high-speed metro of Europe and Asia will become a primary element in reformatting the Eurasian overland transportation system and will require efficient connectivity.

It is likely that not only the system of passenger transportation but also the system of freight transportation over long and ultra-long distances will undergo significant changes. This will happen due to a considerable reduction in the existing transportation time on account of arrangement of delivery of expensive products or those that are necessary for modern industry according to the principle of two-way traffic, which, with a new system of rail transportation, will be able to ensure the optimal balance between service quality, delivery time, and competitive prices.

The “High-Speed Metro for Passenger and Freight Transportation” project differs from the existing systems of passenger and freight transportation in its rather futuristic vision of the future. The objective of this ambitious goal, which must be reached, is to harmonize the existing projects with the aim of connecting them with the new ones that are to be created in order to build a fully functional Eurasian railway network.

It should be noted that this project can also be of paramount importance in reducing the harmful impact on the environment in the territories that will be covered by the railway, and consequently, become an example for the whole world, while adhering to the recommendations of the UN and the authors of the project “Metro of the METR: White Book on the Future of Mobility in the Region”.

In fact, the “Freight Metro” project can become the new fundamental guide on the methods of organizing freight train traffic on the most important lines between the countries of Europe and Asia via Russia and Turkey.

Currently, Europe and China are connected by the Trans-Siberian Railway, which means that it is necessary to cross the vast territory of Russia and the Mongolian border near LakeBaikal, and, finally, enter China near the GobiDesert. However, at the planning stage, there are other, more important initiatives related to the construction of the new railway connection between Northwestern China (the cities of Ürümqi and Kuldja) and Turkey via Kazakhstan, Kyrgyzstan, Uzbekistan, Turkmenistan, and Iran. These projects include the expansion and modernization of the Turkish railway network both for high-speed transportation and freight transportation. Thanks to the possibility of reaching the Bosporus region in order to make use of the new Marmaray railway tunnel, which connects the European and Asian coasts, one can continue traveling in the direction of Europe. The “Freight Metro” project is intended specifically for this additional development of the railway network.

Today, in anticipation of the implementation of these large plans, intermodal transportation is already being carried out along several lines between Europe and Turkey. It is possible to view the DB Schenker project as an example. Within the framework of this project, a three-week route between Duisburg and Halkali was launched for the Turkish shipping company Ulusoy. Not long ago, the Austrian company Rail Freight launched routes spanning from Austria, Hungary, and the Czech Republic to Halkali through Ljubljana.

Therefore, it is possible to expect intermodal transport growth. This type of transport can now compete with both air and sea transport thanks to the significant reduction in the time of delivery in some areas and in relation to the transportation of high-value products.

In order to create a highly efficient chain of freight transport, it is necessary to equip the territories adjacent to the railway and located along the perimeter of large cities along the route with adequate logistics platforms connected to a large intermodal terminal. Such logistics centers, in particular, were built in Italy, whose experience was later adopted in Germany as well. The main goal of this infrastructure is to serve the market and, at the same time, unload stockpiled products from the city centers.

Over the course of several years, a railway connection between the EU, Russia, and China has been implemented according to the initiative of such European companies as DB Schenker, Hupac, Gefco, just recently the Italian company Fercam, and some large Chinese companies. Freight is shipped from 11 Chinese regions and reaches Europe via transit through Russia, Belarus, Poland, Germany, and other countries. The length of the route is equal ca 11,000-13,000 km.

Among the most important projects, it is necessary to name the Yiwu-Madrid route with a length of 13,000 km, which can be traveled in 24 days. Today, the Gefco company offers transportation services from China not only to Europe but also to Russia and seven other countries along the route. The transportation time is from 15 to 28 days. Additionally, on April 21 of 2016, the first train arrived in Lyon from Beijing (organized by the Chinese shipping company Wuhan Asia-Europe Logistics), which had traveled 11,300 km only in 15 days.

In the sphere of freight transportation, new freight cars with a maximum speed exceeding 140-160 km/h are currently being designed. These cars allow for a significant reduction of the transportation time, in particular, over long distances. Today, during trial runs, a minimum of 15-20 days is required for transporting goods from China to Europe. With the new cars in operation, given the new infrastructure, the transportation time may be reduced to 10-12 days.

The China-Europe line is becoming increasingly popular thanks to the types and volume of transported goods. However, currently, shipping is only partially balanced, and transporting goods there and back disrupts the economic equilibrium.

In the European Union, there is a recognized need for further development of the system of mobility for passengers and goods which meets the needs of citizens and, at the same time, allows for a reduction in the impact on the environment, and enhances safety.

In this regard, the following important decisions have already been made:

The Italian government believes in the effectiveness of transporting goods along railway lines and by 2020 plans to increase the existing volume by 50%. The achievement of these results will be significantly enhanced through the utilization of high-speed lines for freight traffic at night, which will make it possible to offer high-quality services on the market. Starting 2018, Italy will become the first EU country to operate high-speed railways for transporting goods at night.

Even with the currently available resources, it is possible to increase the efficiency and develop current railway routes in order to arrive at a new concept of the high-speed freight transportation service. In order for this to become a reality, it is necessary to enforce efficient bureaucratic and customs procedures in interested governments. These measures are a priority even over the measures required for transshipment because of the differences in the tracks. In fact, this can be easily done at border terminals equipped with bridge cranes.

The high-speed Eurasian metro project for the transportation of goods must be harmonized with international initiatives aimed at implementing this project. In this regard, I would like to note the role of the project “Metro of the METR Region: Future of Mobility in the Region” and the Railway Silk Road Cities Forum. All main ideas are incorporated in the White Book, and they can impact the future of Eurasian mobility. The forum is a mechanism uniting the city stations of the future metro around a strategic vision.

The implementation of this large project for developing high-speed transportation service between Europe and Asia in the next decade can become one of the most important initiatives on the global scale. The result of this project will be maximum simplification of the movement of passengers and goods with significant growth not only in material but  also cultural exchange. In the next decades, the “Eurasian High-Speed Metro for Passenger and Freight Transportation” project may play a role comparable to the great geographic discoveries of past centuries.