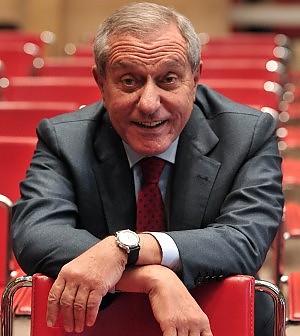 Giuseppe Sciarrone was born in 1947 in Mantua. He is one of the leading advocates of the liberalization of rail transport in Europe. He was the CEO of the Centre for Research Transport Systems (part of the Fiat holding). After that, he held various positions in the Ferrovie dello Stato Italiane (FS). In 2000, Sciarrone left the FS to establish and chair the first independent rail freight operator, Rail Traction Company, which provides transport services between Italy and Germany. In 2006 he became one of the founders of the company Nuovo Trasporto Viaggiatori (NTV) providing services for passengers on the Italian high-speed rail line. From 2012 to 2013, he served as its CEO.

Nuovo Trasporto Viaggiatori (NTV) is Europe's first alternative operator of passenger traffic on high-speed rail. In 2012, the company’s fleet of 25 high-speed trains began providing services to passengers and in 2013 was able to carry 6.2 million people, representing 25% of the market. The company's turnover in 2013 amounted to €250 million and it employs around 1 thousand people.