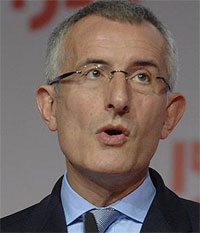 A graduate of the Institut d'etudes politiques de Paris and Ecole nationale d'administration, the alma mater of three presidents and eight prime ministers of France. Had a career of a public servant and a rail manager.

On February 27, 2008, the Council of Ministers of the French Republic appointed Guillaume Pepy as the SNCF President.

Guillaume Pepy is a holder of the National Order of the Legion of Honor and a member of the Suez Environnement board of directors, the management board of the Montaigne Institute, the Sciecle Club management and the MOBILIZ Invest supervisory board.