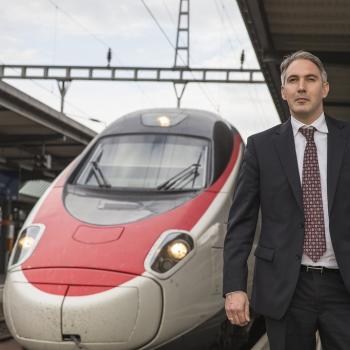 One of the key strategists of the company Alstom discusses about barriers of the market of railway transport and railway industry and about methods of overcoming them.

In the METR region one of the key obstacles are the traditionally developed national railway systems based on different political, operational, regulatory, industrial and technical aspects. These challenges for harmonization refer to rail gauges, national dominated signalling systems, different electric supply networks based on AC or DC voltages, nationally defined safety procedures and other aspects developed over the decades of national driven rail transport development. The harmonization necessary for easing the rail traffic in the METR region will have to respond to all these aspects in particular to secure seamless transportation of freight and passengers and prevent intermodal changes on the way.

It must be recognized that the endeavours of the European Union and the relevant body, the European Rail Agency (ERA), established in 2004 only, are the most progressed in this extent. Rail is recognized to be a vital part of EU transport with a key role in addressing rising traffic demand, congestion, energy efficiency and reduction of CO2 emission and secure sustainable development.

Alongside with this approach the strategic program as Transport 2020 and the long term strategy 2050 are defining clearly corridors for passenger and freight operations to be created and already improving in realisation. Huge investment projects are realized to make this happen as for example the Brenner tunnel and the line between Turin and Lyon. The main leverages of interoperability, cross acceptance, harmonization of safety and regulatory standards as e.g. the TSI, promotion of the European wide signalling standard and the creation of Trans-European transport Network (TEN-T) are leading for any further development beyond the boundaries of the EU.

ERA now presented in November its Multi-annual work program 2014-2017 to concentrate on harmonized conditions in an integrated Single European Railway area. ERA also prepares in this work program to be entrusted with tasks of issuing – European-wide - Safety Certificates for Railway Undertakings and vehicle and ERTMS authorizations. This One Stop shop for authorization and certification will be groundbreaking and improve the competitiveness of EU wide rail transport intensively.

In average authorization procedures for new rail vehicles cost around 6 Million EUR during the process of up to 2 years and currently the certificates are issued by the bodies of the EU member state based still on national regulations. The risk of using these national rules as market entry barriers cannot be denied.

Harmonization of norms and standards are particularly important in the process of infrastructure integration, not only within the EU but also in the whole region METR.

In Turkey the Bosporus tunnel just opened for operations and TCDD introduced very high speed operations changing the transport landscape of Turkey and improving the mobility between regions connected. The first High Speed Line between Ankara-Eskisehir was commissioned on 13 March 2009 and already carried more than 5 Mio. Passengers. Between 2003 and 2011 more than 6400 km were renewed and also a rail industry created. In the very moment only Sofia and Bucharest are destination operated by TCDD to Europe with the Bosphorus Express. With the Vision 2023 Turkish State Railways are developing not only High Speed Lines but also creating new corridors as The Marmaray project connecting Europe and Asia, the Kavkaz-Samsun ferry boat, Kars – Baku – Tbilisi project and other projects with high potential of increasing the market share in the passenger and freight operations and increase the attractiveness of the Turkish network as a European – Asian hub and becoming an international player in the transportation market in the region.

In Saudi Arabia and the Gulf states despite climatic challenges investments are huge, unprecedented projects are in realization phase firstly for national transport optimization and secondly to create the GCC rail network connecting Jordan, Bahrain, Qatar, Saudi Arabia, United Arab Emirates and Oman. As an example the creation of the Etihad Rail network shall be mentioned creating a network of 1200 km from the border of Saudi Arabia to the border of Oman. This creation of the Middle East Gulf network will for sure increase the attractiveness of rail transport in the next decades and serve as an interconnection between the regions of METR.

In the biggest Rail network in the METR region Russian Railways and the Russian State identified Rail Transport as the key priority for the Transport Strategy 2030, The pilot project for Very High Speed which is currently in preparation is Moscow – Kazan as the first section of the Very High Speed Moscow-Kazan - Yekaterinburg corridor, followed by projects on the Moscow-St. Petersburg corridor and the Moscow-Adler corridor. With regard to freight operations two major projects were identified to increase the attractiveness and competitiveness of transit corridors from Asia to Europe through the Russian Federation this is the modernisation of the Trans Siberian Line and also the Baikal-Amur Line. Furthermore one of the visionary projects of Russian Railways together with other state rail infrastructure owners and operators is the creation of a 1520 gauge line, the so-called Moscow – Vienna wide-gauge project, enabling freight and passenger transport from Russia via Bratislava to Vienna. As a result of this project, freight delivery times from Europe will be halved relative to sea routes – from 30 to 14 days.

Notwithstanding the EU activities are going beyond the member states and also states as e.g. Turkey as a neighbour, transport corridor to Asia and the Middle East. Here also the cooperation with the eastern neighbours including the Russian Federation has to be mentioned with a clear political target to utilize the transport corridors to Asia competitive to sea or air transportation. Overall EU recognized to increase its competitiveness based on sustainable strategies and enlarge by this also in the long term the markets for the European markets. Hence it can be stated that this intensity will still be increased and the globalisation of the transportation will also bring the region of METR much more closely and ease the exchange of goods and people.

Customs and border control still a challenge? New approaches of the checking of the freight and passenger operations can be identified in the last decades and improving the speed of land transportation. Examples as e.g. the Allegro train between Helsinki and St. Petersburg with on board customs and border control units on the Russian – EU border are showing the possibility to increase the attractiveness to passengers by finding new means of controls.

Intermodal transport systems will be the key for a positive development of an effective transport landscape serving from door-to-door to its final customers. This development must be supported in all the developments taken to connect sea, rail, road and air traffic in general but with regard to rail also between mainline and urban transportation systems. As example the transport strategy 2050 of the EU plans to connect all Very High Speed Lines with the airports to create intermodal hubs for easing the passenger and freight flow. In Moscow for example the creation of intermodal Transport Hubs are one of the key strategies for fighting against congestions in all new developments planned in the next 10 years. Nowadays increasing the efficiency of intermodal transportation is recognized and it is to be expected that this will be increased in this century to make public transport more attractive in comparison to individual transportation.

Regarding the impact on further integration of the METR region with the EU the impact on the industry will be numerous and changing the industrial footprint. All the players in the market are traditionally grown players covering a national or regional market in the first place as their home market with high market shares and traditional grown protection due to existing delivered fleets and long term partnerships with rail operators or infrastructure owners. Further harmonization of the target rail market in the METR region will lead to further consolidation in the industry, as in Telecommunication or Energy markets.

But not only the railway supply industry will be affected by an increased harmonization of the METR region the impact on the national railway operators will be changing the rules of the game in the METR rail market. Here a different development for infrastructure owners and operators for either passenger or freight transport can be anticipated. While the infrastructure owners will still be concentrated to national boundaries, the operating companies will be challenged to answer a more international target market and optimize their services accordingly. The new business will be more international driven while more national, regional and urban operations will be carved out more and more to private operators. In this case, we can expect a significant increase of competition accompanied with increase of service quality. The key competence of the future operators in the METR region will have to rely on the core competencies of a rail operator in marketing his services and differentiate from competition. Therefore national operators will move to international operations in the METR region and cooperation beyond national borders will be resulting out of it. Major national carriers as SNCF, Trenitalia, Deutsche Bahn will intensify their participation in other countries to stay competitive and use their experience to secure the market share in a more competitive environment. Concentrating on core competencies being operations itself and business model including tariff policy will result in an increasing outsourcing of support activities as e.g. life cycle maintenance services for the Rolling Stock to the producers to secure the availability and reliability and even more the asset management with regard to Rolling Stock .

The creation of the international corridors from Europe to Asia and the Middle East will generate new opportunities for developing new economic zones along the new or modernised corridors. The challenge of wide gauge 1520 of Russian and CIS network and the 1435mm gauge based systems will stay as an impediment but technical solutions accompanied with logistics centres will be easing the goods and passenger flow. The leading role of the EU rail activities shall be used as a model and new developments shall be guided by the recommendations of the future EU rail network. The prospects of the METR region for a more unified transport system are good but depending of course on the political will and the long-term strategies to use the most sustainable and environmental friendly means of transportation.