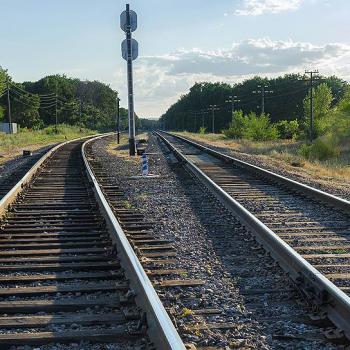 How the Transeuropean transport network will be organised

Since the dawn of times has our culture been influenced by the major historical routes across countries and continents. We increasingly find evidence of unimaginable relations between prehistoric tribes located miles and miles from each other; their needs were surely completely different from the ones we have nowadays and undoubtedly had more to do with survival as opposed to business and trade. However, even our early eras saw flows of people, animals and goods.

Throughout history, great itineraries shaped deep cultural exchanges, the development of civilizations, the boom of commerce… And, let’s highlight this, they allowed to promote well-being, new living standards and exchange of knowledge. As a Spaniard, I would just like to mention the great historical route: our unbelievable Way of Saint James (Camino de Santiago), medieval destination of pilgrims that is still intact, nowadays.

Today, new great routes have emerged, reminding us of those once followed by our great explorers and merchants. Until recently, these new routes mirrored the great ocean routes, the flows of major seaports and the construction of great civil engineering works aimed to overcome land obstacles. However, over the last two decades (and even more recently) great land itineraries have appeared, and as we can see, railways have proved themselves as the most efficient and competitive means of transport to cover great distances by land.

At the same time, we are aware that in the past the fragmentation of territories was understood and established as the way of maintaining political balance (and as a consequence of local conflicts and tensions); however, nowadays we are aware that the fragmentation caused by technical differences largely limits the possibilities of competitive and efficient transport, particularly as far as railways, that are notably sensitive to these differences between neighboring countries, are concerned. Being a relatively medium-sized country, located in southwestern Europe together with our Portuguese neighbors, Spain is no stranger to these problem as it has networks with gauge width (1.668 mm) different from the standard European gauge (1.435 mm).

In 1986 Spain embraced the vision of the “railway of the future” and decided to invest in new high speed lines with interoperable parameters aiming to achieve higher integration into the European railway network. Today, 28 years later, we have invested more than 35 billion Euros and constructed 2,321 km of new type high speed lines with standard European gauge designed mostly for trains operated at 350 km/h and 759 km of conventional lines with maximum speeds of up to 200-220 km/h. This results in commercial speeds of up to 160 km/h on long distances. On the whole, over 25 million passengers enjoy such advantages of high speed rail lines as lower travel time and increased mobility.

We are sure that no one in Spain could have imagined this success and this breakthrough in territory coverage 28 years ago. But nowadays our view goes beyond our national borders and since February 2013 the fully interoperable Spanish high speed network has been a model of overcoming technical differences, integrated into the European network with standard UIC gauge. This eliminates one of the bottlenecks with the aforementioned great European railway routes of today. It also means that international freight trains can reach the French border from Barcelona terminal and port on this gauge.

What objectives can be set at least for the next 11 years, what can be accomplished before 2025?

Due to a number of circumstances, including a very competitive road freight transport sector and railway traffic reduced to a great extent to national and thus short distances, the Spanish railway’s share of the freight transport market has been reduced to a mere 4%. However, with the new vision of “great maps” adopted, the prospects for this pending issue are starting to look brighter. Promoted by the EU, it supports the strategy of transport corridor construction advocated by Spain in hopes of making its railways more competitive on the global market.

According to European Union officials, practice shows that the key obstacles to the establishing an efficient Trans-European transport network are the restrictions resulting from cross border infrastructures, the problems of technical interoperability and the integration of different transport means with competitive advantages in corresponding sectors.

During 2013, the EU revised the previous guidelines on the TEN-T(Trans European Network for Transport) project in order to define a core network of transport infrastructure that incorporates all means of transport, but pays special attention to railways. The strategy of the European Commission was finally approved on December 11, 2013 and was included in the Communication of the Commission “Building the Transport Core Network: Core Network Corridors and Connecting Europe Facility” of January 7, 2014. Furthermore, the ambitious TEN-T policy will be backed by an ambitiously large budget of 26,250 million Euros, allocated by the CEF within the short-term period of 2014-2020. This sum includes 11,305 million for the EU Member States that are eligible for the Cohesion Fund, that is to say, located to the East.

The EU infrastructure policy will transform the current patchwork of European roads, railways, airports, ports and waterborne transport routes into a unified TEN-T transport network aimed to create more opportunities for efficient freight traffic. The “great map” of the TEN-T Core Network includes a network of 9 top priority corridors (Core Network Corridors) that are designed to ensure homogenous development and to national commitments for every member country. From East to West, from North to South, this system will work to define investments, remove of bottlenecks and implement interoperable solutions to eliminate current technical constraints. For example, the implementation of ERTMS European Rail Traffic Management System as a unified signaling system will enable railways to overcome one of the major difficulties for a competitive international rail service. 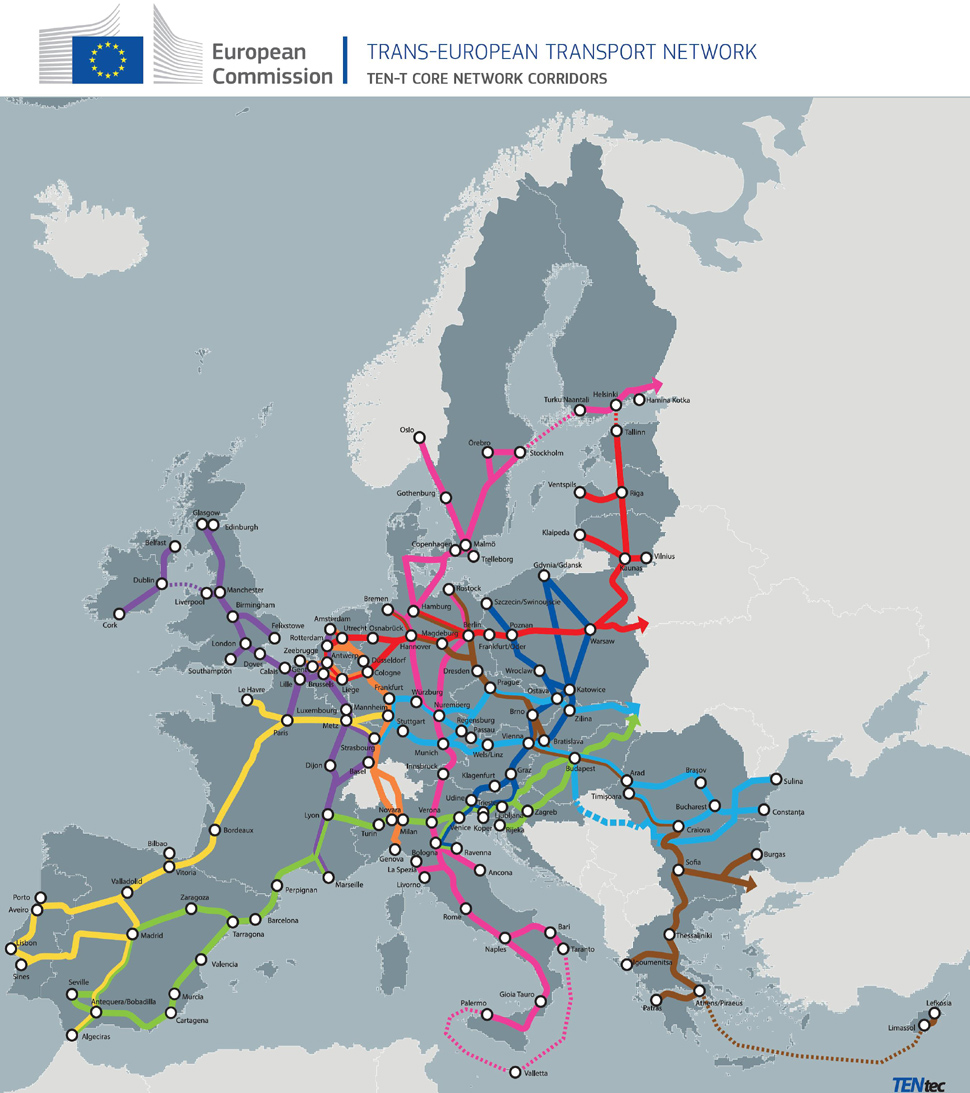 This Network of priority intermodal Corridors includes nine Rail Freight Corridors (RFCs), that allow EU member states cooperate with infrastructure managers like ADIF in the sphere of traffic and infrastructure management and the coordination of investments to improve the quality and reliability of international freight railway services.

Two of these RFCs cross the Iberian Peninsula and are designed to secure a significant increase of Spanish railway’s share in international freight traffic. According to European Commission’s Regulation 913/2010 defining the efficient network of European freight railway corridors that was endorsed in 2010, RFC 4 mirrors the Atlantic TEN-T Corridor to a great extent and connects the Portuguese Atlantic coast (Lisbon, Porto and Sines) with Madrid and the French border in the Western Pyrenees through the Basque Country, towards Paris and the German border in Metz. RFC 6 will link 6 countries of the Mediterranean Arch and Eastern Europe: from Spain to the Hungarian-Ukrainian border (through an amendment to Regulation 913/2010 it is planned to be extended to Algeciras to the West and to Croatia to the East, in accordance with the new TEN-T).

RFC 6 (that mostly follows the Mediterranean Core Network Corridor) is aimed to create a competitive and efficient 6,641-km-long railway link between Almeria-Valencia/Madrid-Zaragoza/Barcelona-Marseille-Lyon-Turin-Milan-Verona-Padua/Venice-Trieste/Koper-Ljubljana-Budapest-Záhony, connecting 96 terminals located on the Corridor and crossing 6 other European Freight Corridors.

In accordance with the abovementioned Regulation, Corridor 6 has been operational since November 11, 2013 and on December 11 the corresponding European Economic Interest Grouping (EEIG) was established for its management. What makes the corridor so competitive is the establishment of the new pre-arranged slots for international rail freight traffic (the slots available for 2015 were published on January 13, 2014 and in Spain they have totaled to 42 slots, on a weekly basis, in each direction available for freight operators both with Iberian gauge and international gauge), together with a One Stop Shop that allocates this capacity. The Permanent Bureau where the Director of the Corridor (RFI, Italy) and the Deputy Director for Infrastructure (MAV, Hungary) work, as well as the One Stop Shop (RFF, France), is located in Milan (Italy).

Eight partners make up the new EEIG RFC 6 established as the corridor’s governing body (Spanish ADIF, French RFF, Italian RFI, Slovenian ASZ, Hungarian MAV Infrastructure Managers and the private one TP Ferro – over the binational section connecting Spain and France, together with those in charge of capacity allocation in Slovenia SZ and Hungary VPE), also making up its Management Committee. The Corridor is chaired by Spain, through ADIF.

Furthermore, an Executive Committee has been established with representatives of the five Member States that are currently members of the corridor. More importantly, two Advisory Groups have been constituted, one on terminals and another on rail operators, in order to assure that all decisions fulfill the expectations of the users, and to allow the main agents of the rail industry to express their opinions on the development of the corridor.

The Implementation Plan for the Corridor includes both the bottlenecks and the measures and investments planned to eliminate those, as well as market analysis and management activities, together with the expected outcomes in rail traffic boom that, according to our forecasts, will result within a short period in a six-fold increase of preexisting traffic.

The most relevant element of this Corridor is the new UIC gauge High Speed line between Barcelona and Perpignan that has been operating since December 2010. Historically, the cross-border link on the Mediterranean axis has been severely constrained by the Pyrenees which rise as a natural barrier and also by the Iberian gauge in such a way that trains had to change axles in Cervere (France) or transfer freight between Spanish and French trains in Portbou (Spain).

This new line, which runs direct high speed trains between Spain and France since December 2013, connecting Barcelona with Paris and Toulouse, and Madrid with Marseille, is operated by a joint company established by Spanish RENFE and French SNCF and is also a major step in the (yet) short history of Spanish railways.

This line is equipped with the European Rail Traffic Management System (ERTMS). It is interoperable (it fully complies with the TSIs, Technical Specifications of Interoperability of the European Union) and is available both for standard European 750-m-long trains and Spanish 550-m-long ones. This gives a fair idea of the benefits of competitiveness that it offers (with this measure the cost of each ton that is transported is reduced in more than 20%). The bypass with double gauge enables trains to circle Barcelona on the inland, linking Barcelona with its Port which is one of the most important ports of the Mediterranean Sea, and also connecting with Europe, through standard gauge. This means the beginning of the effective incorporation of the whole of the Spanish Mediterranean Corridor, one of the areas of major economic activity of the Peninsula, within the central core of Europe.

Indeed, we are aware that there is still much to be done, both on Spain’s side and (probably particularly) on the rest of the Corridor, so that on the whole it becomes fully interoperable, integrated into the whole new TEN-T network. This would bring the vision of “great maps” to life, with an efficient and competitive railway that makes the new reality true, based on the major Trans-European Corridors that will contribute to our current expectations of economic and social growth and sustainability, and connected in an equally integrated way with the major Transcontinental corridors that are also starting to become a reality.

We are aware, however, that we are all working in the same direction in order to achieve these supra-continental objectives that each country contributes to with its own effort; some countries contribute with milestone achievements that we can surely consider historic (as is the recently inaugurated connection in Turkey between Europe and Asia under the Bosphorus) and that can be added to those that already have a long history (as is the Trans-Siberian Railway) and that a sustained joint effort can in a short period, as it has already happen in Spain with our new High Speed network, to offer to us the best results for freight traffic as well.