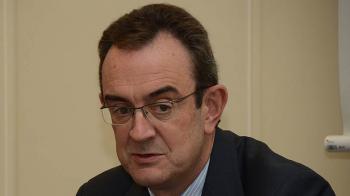 Luis Castilla is the chief executive officer of Acciona Infrastructure. Mr. Castilla holds an MSc/MEng in civil engineering and has nearly 30years of experience in industrial construction, engineering, and operations and maintenance. He leads the development and implementation of strategy for Acciona Infrastructure (construction, water & services) and manages high-level stakeholder relationships, particularly those with clients and partners. He is responsible for a team of almost 30,000 employees in 30 countries.

The projected investment figures for infrastructure development in the METR region are enormous. Just to name a few, Russia has projected investments until 2030totaling nearly $1 trillion, with half of the investments planned to be completed by 2020. In the Middle East, figures are similar, with development projects in infrastructure accounting for $1trillion by 2030. The largest share of these investments is in road and rail infrastructure development. This is most likely a consequence of the fact that more than half of the world’s population now lives in urban areas, and the expectation is that this figure will grow rapidly in the next decades — reaching 70percent in 2050 — and that mobility is one of the most fundamental and important features of economic activity, creating economic growth and jobs.

Tackling the inefficiency and financial burden imposed by underperforming infrastructure is an important issue, as is addressing sustainable investment, since poor decisions or analyses in infrastructure development can have significant economic and social consequences.

Looking at the infrastructure development in western Europe during the past decades, and especially since the 2001 White Paper on Transport was released, the sector has advanced a lot: There has been development of trans-European networks and high-speed railway lines, improvement of transport’s environmental performance, improved freight transportation, and a boost of intermodality as a means of enhanced and optimized mobility for citizens and goods transportation. Nevertheless, as reflected in the 2011White Paper on Transport, the transportation system isn’t yet sustainable.

What might not be so business-as-usual in the construction sector is that the infrastructure company also puts innovation at the core of its activity. Innovation teams must be integrated within the project team since, as we said before, we can achieve sustainable development and economic welfare only by innovating. It is the way to ensure that projects are cost-effective to build and efficient during their operational lifetime.

The infrastructure sector is considered one of the most traditional industrial sectors. A radical change in the consideration of innovation in the sector must be internalized by all the stakeholders involved, if the objectives of sustainable investment are going to be met. Thus, the government and investors procuring a project should evaluate the innovation capacity that the company will bring to the project, along with the usual evaluations of experience in past projects, engineering capacity and so on.

Innovation must be promoted and sought in projects from the earliest stage of development. In a highly standardized sector like construction, and with the appropriate risk-mitigation measures borne in mind, the proposal and use of innovative technologies should be rewarded, instead of being met with barriers that can’t be overcome during the project completion lifetime.

There is no direct relationship between innovation and cost overruns, as is generally thought. Investment in innovation actually has a positive impact over the project lifetime, and projects are built to last for years.

The direct cost of construction must be considered, but the project lifecycle costs must also be taken into consideration, as operations and maintenance costs might negatively affect the expected return of investment.

Innovations in projects can be found in multiple forms: methodologies for integrated development and effective cooperation of all stakeholders involved, new materials that reduce maintenance costs over the project lifetime, and so on. Several examples of innovative aspects in projects are given below as an example of what can be achieved with the goodwill and joint cooperation of a large infrastructure company and the administration.

Acciona is one of Spain’s leading business groups, spearheading the development and management of infrastructures, renewable energy, water and services. Acciona’s strategy revolves around the principles of sustainability and social well-being as the building blocks of economic growth, environmental balance and social progress. Acciona has consolidated its commitment to innovation by stepping up spending ($650million in 2010-2015), developing more projects and programs, and expanding its workforce, a sign of its intention to maintain its leadership position in the development of more sustainable solutions and alternatives.

Providing value-added innovative solutions during the design, construction and operations phases is a feature that has characterized company projects around the world and that should become the standard in infrastructure development projects in the future, regardless of what company is in charge of the project development. The use of technology as a differentiation tool — boosting innovation and continuous improvement of operational processes through the development and business integration of innovative technologies, products, processes and services — contributes to Acciona’s mission to develop, construct and manage infrastructure and to operate under the principles of social contribution, sustainable development and value creation for its stakeholders.

One of the most important new technologies is the Building Information Modeling (BIM) system, adopted by Acciona, which is capable of detecting construction problems and optimizing time and money by applying virtual reality to construction. This maximizes customer satisfaction by enabling clients to make changes and see the finished results of the project. The use of BIM actually creates a collaborative environment among all the stakeholders involved in the project, which in turn results in a reduction of the project’s cost and a drastic reduction of errors made during construction (which, again, are one of the most frequent causes of cost overruns). These benefits have been proven by the experience of numerous projects.

Roads are some of the most important recipients of infrastructure investment. Innovation in the development of materials for road surfaces must be aimed at reducing both construction and maintenance costs. Improved existing materials, modified with nanotechnology capable of optimizing and improving the materials’ mechanical characteristics and resistance to various environmental and chemical weathering agents, will prolong the life of road surfaces and meet the current and future demands of the transport industry. In addition, protection of the environment is also possible by working on the development of new kinds of asphalt, ones that include recycled materials that would otherwise need to be transferred to dumping sites or used as fuel. The use of these groundbreaking materials on road surfaces has many advantages: They improve the resistance of the asphalt, reducing both energy consumption and maintenance costs.

Another example of waste valorization in road construction is the use of shredded end-of-life tires (ELTs) as lightweight fill in embankments, as a partial substitute for the conventional use of soil. The use of this waste material allows a reduction in the weight of the embankment and a reduction of physical stresses, which in turn presents a powerful tool to limit deformations under poor conditions in the foundations. Acciona constructed the first ELT embankment in Europe in 2008with 2,200tons of shredded tires used as lightweight fill. These 2,200tons were located in the core of an embankment that was 200meters long and eight meters high. Acciona has since built three more embankments using ELTs in Tenerife (Canary Islands), Granada (Spain) and Poland.

Bridges constitute an essential element in the development of a road and railway transport network. Acciona is a pioneer in the design and construction of bridges made of fiber reinforced polymers (FRP), also known as composite materials. FRP materials have been used for more than 30years in bridge and footbridge construction. So far, more than 300bridges around the world have had their decks and/or their beams manufactured using FRP materials. Acciona has a proven record in the use of FRP materials in bridge construction and provides its clients an integrated project delivery through the design, manufacturing and construction of the bridge. FRP materials have unique properties such as being lightweight for easy and quick assembly on site and high strength to ensure structural integrity or corrosion resistance.

To date, Acciona has built two road bridges (34meters and 46meters long) and three footbridges (with total lengths of 44-216meters and spans of 44-72meters). The lightness of the footbridges permits rapid assembly processes on site to mitigate disruption to traffic: The assembly on top of the abutments of the 44-meter footbridge was achieved in half a day. Our company’s work in the field of composite materials has been recognized by the JEC International Conference, having been granted the award for best project in construction using FRP two years in a row, in 2010and 2011.

With railways accounting for nearly half of the planned investments in infrastructures, the design, construction, operation and maintenance of rail network infrastructure need to be safe, reliable, supportive of customer needs, cost-effective and sustainable. The European Commission has just launched an initiative, Shift2Rail, to invest almost $1.3billion until 2020in technology developments in rail, aiming to deliver a reduction of 50percent in the lifecycle cost of railway transport, an increase in the capacity up to 100percent and an overall increase in reliability. Rail infrastructure technology is one of the issues contemplated by the initiative with the objective of providing reliable, high-quality infrastructure with reduced lifecycle costs and track noise and increased intelligent maintenance.

Acciona Infrastructure and ADIF, the Spanish railway infrastructure company, signed an agreement to open a new office within the RailwayTechnologiesCenter in the AndaluciaTechnologyPark in Malaga, with the goal of encouraging new railway developments to be applied in the various projects that Acciona designs and constructs around the world. Also expected is the construction of the world’s largest trial rail ring in a nearby location, as a test field for operators, developers and all the other relevant stakeholders.

Some proprietary technologies developed by Acciona have already been implemented or are at an early-adoption stage. Such is the case with a proprietary design of an optimized slab track railway platform intended to reduce construction and maintenance costs, as well as create an increased bearing capacity. Improved environmental-friendly products — such as elastomeric elements based on the waste valorization and enhancement of recycled used tires and polyurethane resin mixed for vibro-acoustic attenuation — will improve comfort conditions for railway infrastructure. In high-speed rail ballast tracks, where the flying ballast phenomenon is a major concern during the operation and maintenance phase, a ballast binder is designed as a bonding system to avoid ballast projection.

In sum, major investments will be carried out in the METR region in the coming years. Megaprojects are intended to stimulate domestic production and demand, and advanced technological solutions are often used in megaprojects, as has been noted by Kirill Androsov, board chairman of both Aeroflot and Russian Railways. The role of large infrastructure companies that can provide integrated services in engineering, construction, operation and maintenance and that have a proven dedicated innovation capacity will be key in supporting the development of these megaprojects. Innovation will be a major factor in ensuring  the completion of these megaprojects on time and on budget and in making the METR region a world-class leader in infrastructure development.