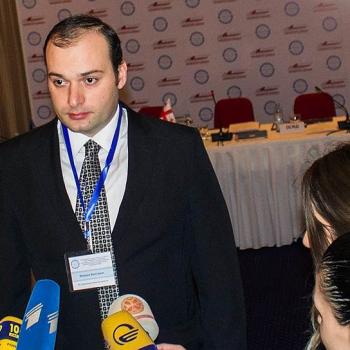 As a result of rapid globalization, international trade, and environmental issues, the importance of an efficient rail network expansion and unification is immense. Being part of the Central Asia – Black Sea corridor, where there are a number of counterparts, the real challenge not only lies in technical issues comprised of different technological standards, but in understanding and aligning the geo-political and economic interests of the participating countries. That is why it is hard to undermine the importance of bodies where different railway companies coordinate their activities, strategies and enhance communication.

Georgia is located at the crossroads of Europe and Asia, serving such countries as Armenia, Azerbaijan, Kazakhstan, Turkmenistan, Uzbekistan, Tajikistan, Kirgizstan and Afghanistan, where strategic cargo transportation takes place. Therefore, the main objectives are: coordinated operation of the transportation industry sectors, construction and modernization of transport infrastructure in accordance with international standards, and harmonization of local legislation with international laws.

Railway transportation plays an important role in the development of the economy of the independent country of Georgia and is an integral part of the Europe-Caucasus-Asia transport corridor.
Georgian Railway, along with its Kazakh and Azerbaijani counterparts who also make up the Central Asia – Black Sea corridor, has recently established the Tariff Committee which aims to harmonize the tariff policy of the participants in order to offer a fixed transportation rate to customers along the whole length of the corridor.

Today, Georgian Railway is involved in a number of large scale projects which aim to increase the efficiency and capacity of the railway transportation system in Georgia, expand the rail network by connecting to Turkey, and to stimulate and enhance intermodal and passenger transportation. These projects are dedicated to strengthening and increasing the TRACECA and the idea of a Modern Silk Road corridor. They will also benefit the wider railway network beyond Georgian borders.

The Baku - Tbilisi - Kars (BTK) Railway is a project of world-class importance that will connect the Asian and European continents. After putting the main line in motion, China, Kazakhstan, India, Central Asia as well as the South Caucasian states will become more accessible for Europe.

The initiators of the BTK project are Azerbaijan, Turkey and Georgia. For the Georgian section of the Baku - Tbilisi - Kars railway construction, Azerbaijan has allocated a credit line with total of USD 775 million.

The project has a huge geopolitical, economical and social significance. First of all, it is a guarantee for the development of international relations. It is a connecting road between Asia and Europe, which will significantly improve the country's international image. The recently completed Marmara Project (a railway tunnel under the Bosporus) ensures a railway connection to Europe through the Turkey.

The project will contribute to the development of the entire region by simplifying export-import processes and establishing direct ties with the other regions. The project will attract investments to the country and encourage more local businesses to export their products to foreign markets.

The anticipated date for project completion is January 2015. By the time the Baku-Tbilisi-Kars railway is completed and the first train passes along the rails, the shortest route between Asia and Europe, forgotten a thousand years ago, will at last have been restored.

The Georgian Railway engaged the leading European companies in early 2010 to prepare a full-scale feasibility study and an initial design study for the Modernization Project. Based on the results of these studies, the Company began incurring costs for the project in September 2010. The key objectives of the Modernization Project are optimizing freight and passenger traffic, reducing operational expenses, improving operational safety, etc.

The Modernization Project has an estimated capital expenditure of CHF 389.7 million (GEL 692.9 million).It focuses primarily on the mainline that runs from Tbilisi to the Black Sea, and in particular to the terminals at Poti and Batumi. As part of the project, the Company intends to modernize the railroad and electric supply infrastructure between Tbilisi and Batumi (315 kilometers), including the 40-kilometre mountainous gorge region in Central Georgia, with the aim of achieving passenger train speeds of 80 km/h on the gorge section and 120 km/h on the rest of the mainline.

One of the key aims of the Modernization Project is to decrease the track gradient in the gorge section. Management believes that a flatter gradient will reduce wear and tear on wheels and tracks, decreasing the need for extra locomotives in that section, and reducing the extra stops needed to cool the brakes on the trains.

Trans Caucasus Terminals (TCT), a 100% subsidiary of Georgian Railways, was founded at the end of 2009. It aims to bring about continuous cargo transportation from China to Europe via Georgia in a minimum time.

Trans Caucasus Terminals LLC has partner companies in China, Kazakhstan, Azerbaijan and Romania. It expects finalization of negotiations to start shipments from China through Georgia in the near future.

There were several reasons behind the foundation of TCT. First and foremost was railway freight diversification. Over half of GR traffic and revenue was provided by oil. The market niche of container transportation- that had dramatically increased throughout last decade in cargo carrying businesses was essentially undeveloped in Georgia, and particularly on the side of the railway.

TCT began functioning in 2011 and since then has begun to operate the only rail connected container terminal in the Georgian capital. The latter is under ongoing modernization and is equipped with three rail-mounted gantry cranes, and a new building with a Custom's Agency. In spring of 2012, TCT opened an off-dock terminal in Poti. The main function of the Poti terminal will be cargo trans-shipment from container to wagon and vice versa. Furthermore, a new warehouse is scheduled for construction at the end of 2014.

Having significant transit volumes from Turkey to Central Asia, Azerbaijan, and Armenia, Georgian Railway has recently opened an inland terminal in Batumi.

TCT plans an additional inland terminal development project in Vale (another point close to the border with Turkey) to start at the end of 2014. With this terminal, TCT has revealed new opportunities for increasing cargo flow through Georgia by rail from central Asia to Turkey and vice versa. With the incorporation of TCT, Georgian Railway underlined the increasing significance of container transportation in the region as well as the market demand for a seamless door-to-door logistics concept.

TCT provides two types of service: terminal handling and freight forwarding. It aims to transport cargo from any place in the world to its final destination. It's main sphere of interest is in the transportation of Chinese cargo through the TransCaucasus route. At present there are ongoing negotiations with Azerbaijan and Kazakhstan on appointing block-trains with terminals operated in Tbilisi and Poti, as well as a third scheduled project in Vale.

Georgian Railway JSC is entering into new project regarding a ferry transportation service to Black Sea basin countries. Georgia has a ferry transportation service agreement with Ukraine, Russia and Bulgaria, and there are also plans for the signing of a similar agreement with Turkey this year. At present, Georgian transport operators are not able to utilize quotas that are dedicated for the country, because they do not have the appropriate vessels. The market is untapped from the Georgian side, while the Ukrainian and Russian ferries successfully use their allotted quotas, with Georgian ports serving approximately five foreign ferries a week.

In order to implement the Project the Company intends to establish a Special Purpose Vehicle (SPV) together with a chosen partner, with equity participation to be further agreed during the final stage of selection.

An important part of the corridor served by the Georgian railway is marine transportation via the Black Sea. The development of infrastructure for a deep water sea port is envisaged in order to overcome the existing limitations. The port is to be oriented on containers and bulk/general cargo, with the capacity to accommodate fifth generation Panamax-type vessels.

The transportation of passengers, while a priority, is a minor business for the railway. Being loss making, it is subsidized by the freight business. The management of the Georgian Railway is working to break even the passenger direction through the introduction of modern technologies and by offering new services.

During the past decade the Passenger Business Unit of Georgian Railway, as well as the whole company, has gone though a number of significant changes and transformations. These changes have concerned the optimization and rehabilitation of rolling stock, the reduction of operating expenses and optimal resource utilization, the introduction of new services, and significant improvement in management systems.

Nowadays, the Passenger Business Unit is offering comfortable transportation services to its customers on modern electric trains, with a strong focus on service quality, continuous improvement, and new services with the aim of increasing customer satisfaction and loyalty.

The Passenger Business Unit was established in 2005 following recommendations provided by consulting company Booz Allen Hamilton. The key challenge that faced the Business Unit in that period was an obsolete rolling stock fleet left over from the Soviet period, plus inflated operating costs and low labor productivity. The first steps that the Unit took in order to satisfy the increased demand for passenger transportation in line with the economic development of the country, was the modernization of 38 sleeping cars in Dnepropetrovsk and their commissioning on the popular Tbilisi-Batumi route. In order to increase rolling stock availability, the capital repair of wagons was begun in the depot facility of Georgian Railway.

In 2009 the company commissioned three new electric trains constructed by a Georgian company together with Chinese partners. At that time, these trains were the most comfortable in the South Caucasus region. Then, in 2012-2013, Georgian Railway commissioned five new generation electric trains procured by Chinese company CSR Nanjing Puzhen Rolling Stock. According to the existing strategy the company plans to operate old sleeping cars until the end of their life-cycle, after which they will be completely replaced by electric trains, travelling on which is much more comfortable and also time-efficient- the travel time on such trains is two times shorter compared to sleeping cars.

Today, Georgian Railway is in negotiations with European producers to acquire modern EMUs.

In 2013 the company has introduced new on-board services on their electric trains such as internet access during travel and fast food vending machines. As a result of the commissioning of such new trains, the improvement of service quality, and the optimization of the tariff policy, passenger turnover increased by 12.5% and revenues by 13.7% on Tbilisi-Batumi and Tbilisi-Poti routes compared to previous year.