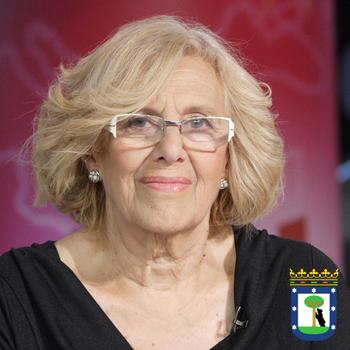 In June, a meeting of the New Railway Silk Road Forum dedicated to the cities as stations of the future Eurasian High-Speed Metro was held in Sochi. Before the event, Mayor of Madrid Manuela Carmena presented her vision of enhanced mobility in Europe’s third most populated city.

Today, mobility has become the fourth most important requirement for social integration after housing, health, and education. Citizens’ rights to move around must be ensured regardless of their age, gender, income level, degree of integration, physical abilities, or place of residence. The goal is, therefore, to strive for development of a transport system which is universal, equitable, accessible, inclusive, and non-discriminatory.

Using new, rational models of mobility, cities must play a leading role in combating global warming and searching for ways of efficient use of energy. This is an assertion based on facts: 72% of Europeans live in urban centers that account for 75% of energy consumption and generate 85% of the European Union’s wealth.

Mobility of people and goods, on the one hand, determines urban development and, on the other hand, is a result of this development. Over the past few decades, Madrid has experienced major social, demographic, cultural and economic changes that have significantly influenced transport mobility. Such factors as population growth, increased income, more active participation of women in the workforce, development of consumer markets, population dispersion and new urban developments have given rise to a growing number of vehicles. While initially meeting these new needs, this process has entailed new challenges that have to be faced.

In the mid-20th century, there were new studies that predicted deterioration in urban welfare and proposed measures to rationalize mobility and urban planning. Since that time, administrative authorities have started to become aware of the magnitude of the problem and understand that the traditional models of adapting the infrastructure to the increased demand do not offer a solution that will remain efficient over time.

MOBILITY POLICIES IN THE CITY

Madrid has focused on improving its mobility system with the aim of making the city a vibrant, friendly place that is convenient for all. This city model requires a set of principles to ensure that the system:

Madrid’s main achievement that restores the priority to people over cars is the development of the strategic work plan known as the City of Madrid Sustainable Urban Mobility Plan (SUMP, or Plan de Movilidad Urbana Sostenible), which was approved in December of 2014.

This Plan is a management tool that enables the City Council to structure mobility policies on the basis of general objectives for improving environmental quality, competitiveness, safety and universality. It works towards a “smart city” model which incorporates information and communication technologies to achieve a sustainable urban system.

Madrid’s road network has a radioconcentric structure, combining ring roads with radial access roads, which are extensions of the motorways into the city.

There are five ring roads in Madrid. The first two, the M-10 and M-20, are urban roads near the downtown area, with numerous stretches with tunnels and bridges, especially along the M-20. In contrast, the outer ring roads (the M-30, M-40 and M-45) are completely segregated, except for certain stretches of the M-30.

The radial routes are extensions of the motorways into the city; they are also segregated and often serve as boundaries between the city’s districts. As they cross the M-30 running into the city, these access routes are less channelled and mostly turn into urban roads. However, we should single out the capacity and continuity of the Paseo de la Castellana, which is an axis enabling the traffic to cross from north to south almost the whole city that has an elongated oval shape.

La Castellana is divided into three parts and crosses almost the whole city.

On a typical weekday, 2.5 million car journeys starting or finishing in the city of Madrid are recorded; in addition to them, there are taxis and delivery vehicles totalling up to 0.9 million journeys.

In terms of the modal split, public transport was the mode most widely used in 2012, accounting for 4o% of journeys mostly by metro and 30% on foot. Private vehicles accounted for almost 30% of journeys in Madrid.

With regard to sustainability, while at the metropolitan and suburban level the modal split is acceptable compared to that of other European capitals, it is not satisfactory in terms of journeys starting and finishing outside the M-30 third ring road. Private car usage accounts for almost 50% of this modal split, which poses a challenge for mobility in the outskirts.

In the Community of Madrid, activity is concentrated in the capital, while residential neighborhoods and services are located peripherally. This leads to a significant daily flow of people from the suburbs to Madrid for work, involving long-distance commute which is possible only with personal vehicles.

Recent years have seen the relocation of some activities from the city center to the outskirts of Madrid (between the M-30 and the city boundary). As a result of the transfer of economic activity, despite the availability of the efficient public transport system, oftentimes it cannot compete with private vehicles in terms of time savings, leading to increased usage of private vehicles in the outskirts

Usage of private vehicles for commuting to work is responsible for more than half of the pollutant emissions in Madrid. Peak times for this type of mobility coincide with those for general mobility.

The current trend is to move toward a competitive mobility system, which considers mobility as part of the city’s production process, contributing to its economic and social development. Traffic congestion levels (in the sense of the time lost during travel) attributable to excessive demands on a limited road network, entail huge costs, both on an individual and public (municipal) level. Reducing travel times and the system’s overall operating costs is a priority objective for a more efficient mobility system.

In this regard, it is necessary to implement measures to reduce the demand for personal vehicles. These measures will allow improving citizens’ quality of life and prevent serious disruption to essential activities, such as the carriage of goods due to congestion levels. The following actions have already been undertaken in the city of Madrid:

The Madrid Metro network is one of the most extensive in the world (293 km). Inside the M-30 third ring, metro stations can be found within a radius of 350 m from each other, and the line system provides services to almost any part of the city. Citywide, 66% of the population has a metro station within a radius of 600 meters (less than 10 minutes’ walk).

The urban bus service has a network of more than 200 routes, spanning approximately 775 km. Bus routes cover areas that are not served by the Metro and allow for short trips where a metro ride is not convenient. Almost 100% of the population of Madrid is less than 350 m (5 minutes’ walk) away from a bus stop where buses make a stop with a frequency of less than 15 minutes.

Within the Community of Madrid there is a large amount of intermodal traffic (using more than one mode of transportation: car-bus, bus-metro, bike-train, etc.), amounting to approximately 14% of journeys and rising to 33% in case of buses. While intermodality with utilization of the Metro, train and intercity bus is organized comparatively well (with 13 major interchange hubs connecting the city’s different access routes), it could still be improved in terms of bus-metro transfer or bus-bus connections, since it is often the case that intersecting bus routes have bus stops that are located too far away from one another or the Metro.

The radial design of the network, as described above, impedes long-distance journeys; moving away from the center, public transport coverage decreases, leaving many areas of economic activity with no Metro service. Currently, there are ongoing efforts to increase the commercial operating speed, mainly on outskirt-to-outskirt routes which offer lower value for money. This should ensure that the competitiveness of public transport in the city’s outskirts will become progressively closer to that of the center.

From the standpoint of sustainability, it should be added that according to data from 2009, 55% of NO2 (nitrogen dioxide) emissions were produced by ‘essential’ motorized transport: bus, taxi and urban goods delivery vehicles. These types of journeys allow no possibility of intermodality, especially with the use of those vehicles that are less harmful to the environment. So, the main objective in this area is to promote change toward cleaner technologies.

Madrid is one of Europe’s most important cities, with the third largest population in the EU after London and Berlin. As is shown above, the development of mobility has been an important part of the city development. Projects of development of the Madrid transport system have been created in the context of pan-European initiatives. As for the sustainable mobility policies, Madrid is an advanced city with corresponding infrastructure and technologies.

Infrastructure design is one of the determinants of mobility in the city and, with proper management, this may become its greatest asset. In Madrid, the existence of ring roads to distribute traffic, superimposed on a high-capacity radial access structure, ensures that outside the hours of congestion there are rapid connections between different areas, which is a fundamental quality for transport systems.

Information technologies and communications are already being used in traffic management systems and monitoring tools, providing for data collection and analysis systems, modelling of potential measures, creation of smart tariff systems, utilization of public information systems for more efficient route calculations, etc. Its ongoing development requires continuous adaptation to the new technologies and the search for tools to reduce costs.

On the other hand, it is important to add that the efficient public transportation system complemented by long-distance services and airport services places Madrid in a privileged position in the area of mobility allowing the city to participate in any major projects involving passengers or goods.

Thanks to its geographic location, namely its proximity to Africa and the Atlantic Ocean, Spain can have favorable influence on the development of economic and transport mobility of the METR region. In its turn, the capital has a central position within the Spanish transport mobility system: Madrid is integrated into the intercity high-speed Metro, has a large aviation hub and transport junctions connecting motor roads with railways. Hence, Madrid can become one of the key intermodal centers of the METR region, and growing demand, in its turn, will give an additional impetus to the development of the urban mobility system.