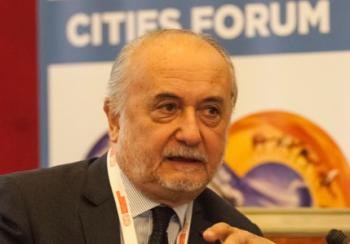 LIMES: What is the point of the Forum of the Cities of the New Railway Silk Road?

It is a forum established by MIR Initiative to promote projects seeking to build a high-speed rail network to unite the Middle East, Europe, Turkey and Russia (abbreviated as METR) and link the Eurasian continent with China by a New Railway Silk Road.

To visualise the idea, we have decided to use a conceptual image of a high-speed metro comprising 223 cities/stations. The project's interactive map features a potential route from Beijing to Turin (about 9,000 kilometres), which would be covered in 23 hours in the future.

These are clear and simple symbols, but they carry an in-depth message. I believe that the European identity, a concept that some people currently do not support, lies in European cities. But for Paris and London, all other European cities are of medium or small size, with a historical centre that represents their features. Such city landscape, which is standard and almost the same for most European countries, is not inherent to other parts of the world. In Asia, Africa, Latin America and partially North America we observe the megalopolis phenomenon. The cities grow to lose their identity, unlike the Old Continent, and face many challenges, but at the same time offer a huge potential. 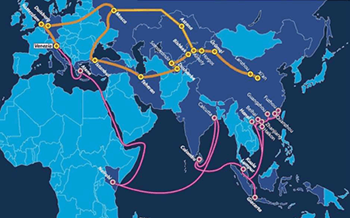 NEW SILK ROAD, ACCORDING TO BEIJING
Map by Laura Canali

Most European cities can hardly compete with large urban agglomerations in economic terms. The EU has two options: switch European cities to a new model or focus on connecting our centres and building a large embedded rail system without developing megacities. I'm positive that the second option is better fit for globalisation challenges.

The first summit of the Forum of the Cities of the New Railway Silk Road was held in Turin, the place of the Forum's European headquarters, where we have signed the Charter (the second summit took place in Sochi on June 3). Our deep respect to Piero Fassino, Mayor of Turin, who did not hesitate to accept our proposal for Turin to join the Project. At the first meeting we discussed both the "high-speed metro" concept and the projects currently in progress: Trans-European Transport Network (TEN-T), Southern corridor running through the Caucasus and Turkey, and Moscow-Beijing Eurasian High-Speed Transport Corridor with a possible extension to Berlin. The TEN-T project with its nine key corridors is designed to build a high-speed rail network to link European cities.

LIMES: How can the Railway Silk Road match with the Eurasian continent's geopolitics, particularly, the Western economic sanctions against Russia?

Surely, each country, who participates in the project, proceeds from its own interests. Russia seeks – without creating tension – to develop initiatives so as to counterbalance the economic sanctions, to create a favourable climate with European countries for implementing infrastructure projects.

However, such initiatives as the Railway Silk Road shall not be situation-dependent. They should be interpreted within a long-term perspective and implemented despite current difficulties.

Thus, Cavour proposed the railroad network as a pillar of national unity as far as in 1846, before the Unification of Italy. I also recollect the prophecy by Luigi Federico Menabrea, who commented on the approval of the Frejus tunnel in 1857: "I believe in the future opening of the Isthmus of Suez, because I am positive that Europe will finally realise that its survival is dependent upon the opening of this route to India and the South China Sea to balance the power of the rival, who grows with an incredible speed to become a giant on the other side of the Atlantic (meaning the USA). I underline that the future of our region (Piemonte) is reliable, because Piemonte is going to reach incredible prosperity, as it will be an important section of the goods and transit route between Europe and the East".

On May 8, Russia and China signed an agreement for the construction of the Moscow-Kazan HSR, which involves USD 5.8bn of Chinese investments with the overall cost of the project being USD 21.4bn. The line will run further to Beijing and be a critical component of the New Silk Road system.

Other lines are also currently being explored, designed and constructed. In April, following the Tehran visit of Matteo Renzi, Italian Prime Minister, RFI - Italian Rail Networks and Islamic Republic of Iran Railways signed a EUR 3bn agreement for the construction of a high-speed line in Iran. Hupac, the largest Swiss carrier, is involved in rail transportations from China to Spain using the existing railway system. New lines, connected by the existing ones, will give life to the new Railway Silk Road.

LIMES: April saw the first haul from Wuchang to Lyon. You were there to see the train arrive. What can you tell us about it?

The trip was very symbolic. I would like to underline some facts.

First of all, the logistics company that arranged the trip, is Chine Wuhan Asia-Europe Logistics, plans such transportation on a regular basis. It shows the interest the People's Republic has in Europe. Its containers carried China-made high-tech products, computer parts and chemicals, rather than poor quality goods.

The trip took 15 days. Same trip by sea would take 36 days on an average. Curiously enough, most time on route was spent to overcome bureaucratic barriers at border crossings outside the EU. In some cases, border crossing clearance took up to 24 hours, in others documents were translated into other languages immediately.

Then they had the track gauge problem. Russia and Belarus have a wider track gauge compared to France, and consequently containers need to be reloaded on another train. Twenty two train drivers worked in turn, changing each other.

Furtherance of such projects does not only depend on the infrastructure, but on having a clear regulatory and administrative base in place.

The reasons for choosing Lyon as the final destination included the fact that the city has for many years invested in Chinese relations, including cultural exchange. It supports the idea that to develop such projects we need to build and consistently maintain long-term relations.

Building new silk roads primarily needs prior testing to prove their feasibility, as in this case.

LIMES: Does China seek to invest in Italian infrastructures? What is the role of Italy in the Railway Silk Road?

By all means, China seeks to assess whether there is a potential for investments in Europe and Italy.

Italian infrastructures, our engineering systems and our opportunities are of top quality. We have to leverage our superiority to build the system.

High-level relations with China oriented at infrastructure construction are reasonable and worth of approval. If realised, China's investments can focus on single point projects, on individual infrastructures.

Italy may serve freight flows coming in from the Suez Canal, for example, through Genoa, Trieste or Venice ports, to forward them directly to the heart of Europe instead of passing through the Strait of Gibraltar to Antwerp, Rotterdam, Amsterdam and Hamburg. The new silk ways would also allow us to export our know-how intensive products.

LIMES: What is the function of the Turin–Lyon line in this situation?

The line to be built by 2029 is the central link of TEN-T's Mediterranean corridor which is going to reach the Strait of Gibraltar. We are now working on a feasibility study and a case study of potential African underwater tunnel construction. It means that the Eurasian rail network will once be able to connect Africa, Europe and Asia.

LIMES: What will be the next steps of MIR Initiative? 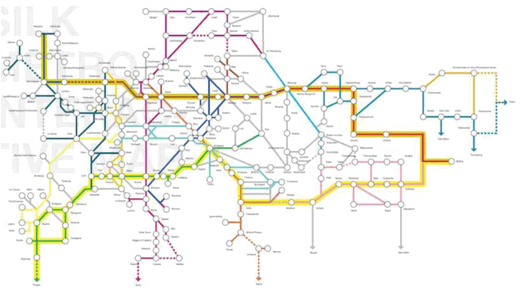 Prepare a feasibility study of the Railway Silk Road to outline the areas for optimisation and improvements to be made in administrative and bureaucratic terms. We have to figure out what we can do to improve the existing infrastructures and those under construction, set deadlines, identify missing links to focus our efforts, and assess our financial flexibility. In the latter case, we have to identify the appropriate financial tool to drive capital flows to the project implementation. These are activities where it is critical for Italy to steer the administration, generate proposals and provide assistance by leveraging its engineering knowledge and investment potential.