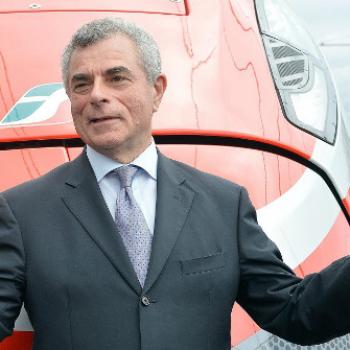 What is necessary to create a common European transport market

Italy’s top state company manager Mauro Moretti, President at Ferrovie dello Stato state-owned railroad operator, outlines what should be done to create a common European transport market and how this experience could be used in its neighbor countries.

The METR (Middle East, Europe, Turkey and Russia, soon joined also by Mediterranean countries) region includes some of the territories that are of top priority for Gruppo FS Italiane group’s development. This macro-region is becoming more and more important for Italy’s and Europe’s economy progress both to promote direct trade with neighbour countries and provide for the potential transit flow from the Far East.

It goes without saying that Europe's extensive experience in promoting and maintaining its member-states integrity by introducing international transport policy should be taken into account here. The EU is supporting the TEN-T (Trans-European Transport Networks) project by contributing to the establishment of a policy aimed at facilitating ground traffic organisation, eliminating bottlenecks and optimizing the infrastructure through its member-states coordinated investment programs that were launched years ago.

Despite the fact that infrastructure network design is well-developed today, certain restrictions of the TEN-T project were discovered in the last few years. And although TEN-T is fundamental for Europe’s “general development plan”, the funds allocated as part of this project are not enough to create the large-scale infrastructure Europe needs to eliminate the physical and technical hindrances for cross-border freight traffic. From 2007 to 2013 EU allocated only €8 bln from its budget with the chronically insufficient interstate financing taken into the account. That is why the European Commission suggested revising the 2014-2020 plans and introducing new TEN-T standards and CEF financing tool aimed to reconsider the maps and routes of the top priority corridors. The new planning scheme I backed as CEO of Gruppo FS Italiane and President of Community of European Railway and Infrastructure Companies was approved on 19 November 2013.

Through CEF Europe was able to pick out the core network of 9 main cross-border corridors that must be considered top funding priority and completed by 2013 and complement it by a large additional network that must be finished by2050. However, transport sector allocations (in particular, as far as the CEF, which has also to do with energy and communications, is considered) were cut. Only €23,2 bln were allocated for transport development in 2014-2020 from EU’s meagre budget as opposed to the €50 bln suggested by the European Commission. We hope that CEF bond projects will allow to attract private capitals despite the fact that state fund will still be main source of railroad financing.

But despite such a limited increase in funding CEF has established the minimal goals (in particular, in interplay) that must be accomplished by 2030. For example, the whole core network must be equipped with ERTMS. The mechanism includes aims worked out under joint transport integration methodic that covers train, airports, and especially seaports, which are a serious issue both for Italy and the rest of Europe. In Europe 100 ports must be chosen among the approximately 440 priority ones, but even that is too many to be integrated into the core network.

I hope the CEF will allow to create a real common European railroad service market free of physical or technological barriers and open for operators from different countries to compete on. The results that member states commit themselves to remain the key criteria in choosing infrastructure investment priorities.

his is why I support the decision to consider Turin–Lyon rail line an object of strategic importance made at the 20 French-Italian summit on 20 November 2013. Italy’s priorities are maintaining and expanding its connections with Europe, breaching the Alpine barrier and thus solving the issue of its geographical isolation from Central Europe. The Italian high speed railroad network, which is a great achievement and an example to be showcased on the international level, will always remain remote and subordinate if compared with the basic European network due to the fact that it is not integrated into Italy’s neighbour lands’ railroad systems. However, Europe’s top priority as stipulated by the 2011 Transport White book is to eliminate the bottlenecks hindering the operation of 4 TEN-T corridors from France, Switzerland, Austria and Slovenia crossing Italy and restricting high speed and freight traffic. Europe’s commitment to establish freight railroad corridors that have been in operation since 10 November 2013 works as another proof for this point. But despite Italian railroad management’s efforts the country is still facing technological and geographical challenges that cannot be tackled without creating such long and expensive Alpine tunnels as the Turin – Lyon high speed line, the new Brenner or tunnel similar Swiss projects.

We cannot give up high speed rail lines, and I think much effort is required from Europe to regulate the market. Here the European Commission could learn from the Italian experience, because the country was the first both in Europe and in the world to see a market open for two high speed rail operators to compete. Brussels is currently working on standards and regulations, and I do hope that we will be able to transition to a common European market where railroad operators will be able to compete without administrative barriers or monopolies, working on state and private investments. Unfortunately, there is still a long way to go if we want the rail service market to be as dynamic and competitive as the air transport sector, but I will do my best as the head of Gruppo FS Italiane to make this vision come true. In fact, today Italy could be showing Europe’s highest rates as far as high speed rail business, economy, funding, quality, traffic density and service are concerned.

43 Ministers of Transport gathered in Brussels to meet Siim Kallas, Vice President of the European Commission and the Commissioner on Transport on 14 November 2013. New focus on the Mediterranean region and Trans Mediterranean transport network development are important goals that must be achieved to connect Central Europe with the countries on the northern seashore through so-called sea highways and boost EU-backed infrastructure projects aimed at improving the quality of cross-border freight transit in Northern Africa. As head of Ferrovie dello Stato Italiane, I share these goals completely. We should also pay attention to the green corridors for fresh and perishable products connecting the Mediterranean region with the EU right now.

I also hope that METR region countries will look up to the European policy and market regulation standards, in particular, as far as technical interoperability requirements are concerned.

Our project in Egypt, which is bilaterally acknowledged as the core of the cooperation between the two countries even after the 2011 revolution, incorporates a range of measures aimed to introduce European-level service and management standards in Egypt’s rail transport sector. Its importance is accounted for by the fact that Egypt is the key player on the Mediterranean geopolitical scene. The company’s management would like to thank the new Egyptian government for its cooperation in rail transport. The expert team will keep consulting the Ministry of Transport until 2014 on railroad restructuring, providing the country’s senior railroad managers with their expertise in management strategies and technical skills.

Another important integration and standardization initiative that Gruppo FS Italiane has contributed to is the Arab railroad network research. Initiated in 2010 by the Kuwait-based Arab Fund, this research covered 21 Arab League member states and was aimed at estimating the volume of work required to integrate their national railroads into a regional pan-Arabic system. Due to its scale and nature the project is of special strategic, political and economic importance. The railroad concession featured a complex control scheme with the Arab State League participating through a special agency created to establish a State Arabic network that would take special position in this sphere if the project is implemented successfully.

West Balkan’s network is connected with EU’s border states (Slovenia, Hungary, Romania, Bulgaria and Greece), represented at the Adriatic sea through six ports (Fiume, Spalato, Ploče, Bar, Durrës and Vlorë), crossed by three Pan-European corridors (V, VIII and X) and six regional routes. Serbia controls its major part (approximately 1/3). Its best infrastructural conditions can be seen in the north-southern direction (corridor X and its branches) which is intended to connect Germany and Austria with turkey and Greece. Gruppo FS Italiane participated in various modernization works funded by the EU, European Bank for Development and Reconstruction and the European Investment Bank.

As a country with a large railroad network, Turkey has launched both organization and management and infrastructure modernization programs, the latter including high speed lines construction projects. As the country’s relations with Europe developed, Turkish railroad system saw European standards introduced and promoted by newly established agencies, which means that the country is ready for the future integration. This network will be easy to connect with the Marmaray rail tunnel under Bosphorus that was put into operation in October 2013.

There is also a range of noteworthy modernization and development projects in Russia, from Moscow – Kazan high speed line that will be designed shortly and various Europe-oriented freight and passenger transport programs. Russia will also see real benefits from high speed lines just as Italy and other European states did, especially as far as civilian mobility is concerned. Another project that should be mentioned here is the Vienna (Austria) – Košice (Slovakia) wide-gauge line that will require approximately 450 km of new infrastructure and a new logistical centre established in the area to support the new businesses. The new line must lead to an increase in freight traffic, shorter logistical cycle and shorter travel time for freight transit from Asia to Europe. This project will be complemented by another one, the Trans-Eurasian Container Lines that will allow transport goods from China to Europe by land as opposed to a 45-day-long sea voyage.

Localisation as a challenge