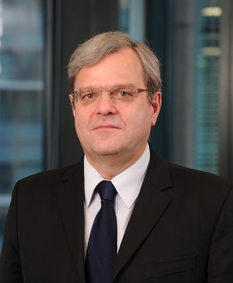 Thomas Maier, Managing director of the Infrastructure sector at European Bank for Reconstruction and Development.

Mr. Maier joined the EBRD as Senior Project Manager in August 1993 from NatWest Markets where he worked on acquisitions, management buy-outs and highly leveraged transactions in the UK and Western Europe. At the EBRD, he worked as Senior Banker in the Romania/Moldova/Croatia/Ukraine country team. In 1999 he moved to the Municipal and Environmental Infrastructure Team as Deputy Director and became Team Director in October 2001.

The EBRD is an international financial institution created in 1991 that supports projects from Central Europe to Central Asia and Southern and Eastern Mediterranean. With €30 bln in capital EBRD finances projects in 34 countries. Through its investments the EBRD promotes economic growth in its countries of operations, infrastructure development, adoption of strong corporate governance, and structural and sectoral reforms.